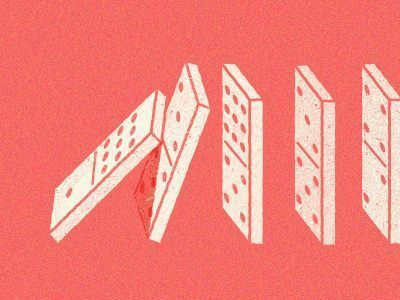 The domino itself is really, just a rectangular tile that’s used as a prop in a game. Believe it or not, the original game of Dominoes is played more like scrabble. Yet, someone decided to stand up these tiles and subsequently watch them fall one after another. The domino effect stems from the trend of falling dominoes but symbolizes so much more.

Symbolism is about looking past the surface and finding meaning in even the most seemingly simple things. The domino effect itself is a relatively simple concept that shows that one event can produce a succession of similar events. To me though, the domino effect also symbolizes purpose. It’s just like one of those videos on YouTube where they spend hours placing each domino so that the series of falls runs perfectly. If even one domino was out of alignment, then the series would be cut short, ruining the whole video. The domino effect represents this idea and shows that everything, and everyone, is important and holds the ability to ignite change.

Johnny Vegas once said, “there’s a domino effect with certain things you say” and when it comes to fighting against rape culture, the things we say are extremely important. If you know what rape culture is, then there truly is no excuse to not be informing others when they are speaking in a way that promotes it.

For example, one evening I had just gotten off work and when I saw my friend, I asked how her test went. She replied, “Oh that test raped me.” This was a comment that I knew was wrong, but I had no idea how to respond. I didn’t want to encourage it, but I also felt awkward calling her out. So, what did I do? Nothing.

Confessing this story to you is embarrassing for me because it shows that I was not advocating for sexual assault, and now that I know even more about rape culture, I know that saying nothing was the worst thing I could’ve done. I want us to live in a society that doesn’t excuse rape, one that also teaches people not to rape versus how not to get raped. In order to get there though, we need to come together, by speaking out, and by educating others when we hear comments like the one I shared. Just like the domino effect, every single person holds an important role in affecting rape culture. If everyone was to decide to take action then the normalization of rape could cease to exist, but if even one person doesn’t, then the impact falls short.

If you think about it, dominoes honestly have it easy because they don’t choose to fall. We, on the other hand, must make a choice. Do we stay silent? Do we correct those around us, even if it may be uncomfortable?

To be honest with you, the fact that correcting someone is uncomfortable is the exact reason why it’s so necessary. A lot of people say these things because it’s normalized, they don’t realize the impact their words are having. The uncomfortableness is needed because it helps people learn the seriousness of the situation and, hopefully, teaches them not to say something like that again. Over time it will become less uncomfortable because saying those things will no longer be normal. But again, that time won’t come unless we all are making the right choice together.

I’ve made the wrong choice before and that means I’ll forever have to live with the fact that I’ve contributed to rape culture. Whether or not you relate to this, I hope that we can learn from my mistake. Never again will I stay silent. Not just because I owe it to myself, but because of the domino effect, I also owe it to everyone. I refuse to be that domino that is out of alignment and I refuse to let you be one either.