Sexual Assault and the Bystander Effect 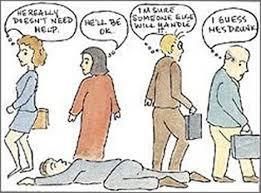 A high school girl witnessed her friend being raped by a 29-year old man that they met the day before, but instead of calling for help or intervening to stop the rape. She took out her phone and began to live stream the rape on social media. She later said that it was to stop the attack. The views, shares and comments came in and hundreds of people that were watching but did nothing. Finally, a friend that just so happened to watch it on social media and called for help. Lawyer Kelly Charles-Collins tells this riveting story to a packed crowd during a TED Talks in 2018 about the bystander effect.

More commonly, these situations have become more evident in our society in one form or another. Whether it is in person at a party, where sexual violence may occurred or through social media, where it could be a live stream.

Many people may ask, what is the bystander effect? The Bystander effect refers to the phenomenon in which the greater the number of people present, the less likely people are to help a person in distress, according to the website Verywellmind.com.

Latane and Darley, researchers that are considered the forefathers of bystander effect research, say people are more likely to intervene when they are alone rather than in the company of others.

There are a couple of contributing factors that cause the bystander effect. The first contributing factor is called diffusion of responsibility.  Diffusion of responsibility basically states that people are less likely to take action when there is a large presence of a large group of people or large number of people watching during a live stream event on social media. The next contributing factor is the need to behave in correct and socially acceptable ways. As other observers, onlookers or even viewers fail to react this is often taken as a signal that a response is not needed or not appreciated.

People failed to notice assault. This can be tied to how rape culture has been normalized in today’s society. Another theme is that witnesses of sexual assault do not believe it is their responsibility to intervene. These common issues is why the prevention of sexual assault is difficult, because the bystander effect and people perception on who has the responsibility to prevent it. The next theme is people think they do not have skills or the abilities to stop it. This is wrong; everyone can stop it whether it is by saying something, by force or by getting someone to assist in stopping it. They are inhibited by the belief that those around them will negatively judge them for intervening. Witnesses too often fail to intervene for one reason or combination of these themes.

2. Identity When It’s Appropriate To Intervene

Whether the situation or behavior calls for action. Understanding the situation and determining if the situation needs intervening. Also, gathering additional information might be needed like observing the situation, checking in verbally like saying “are you ok?” or “do you need help”, or asking another bystander what they have seen.

Couple of questions are asked at this step. One of the questions that could be as is “Am I Responsible?” and another one could be “Do I need to act?”. One of the issues at this stage is thinking someone else should do something.

4.Know How To Intervene

Safety is the most important step in any intervention action. Safety of the victim and the bystander should be considered at all times and intervention should not be performed if  you feel that someone's safety could be threatened.