"Why didn't you just report?" 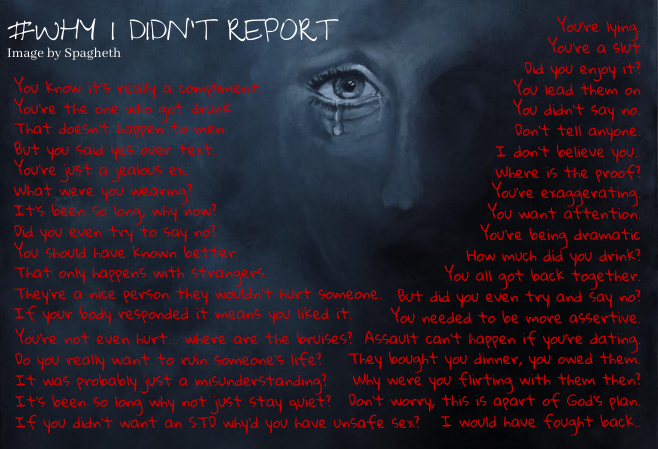 Why didn’t you report?

Those words echo through the crowd, the friend group, the strangers across social media… “Why didn’t you just report? Why did you wait so long to say something?

1. A survivor didn’t know it was sexual assault

I believe sexual violence permeates all aspects of our lives. We see sexual violence in movies, TV shows, and ads. It’s used as a selling technique, to show “eroticism,” and as a joke. Then in interpersonal relationships, some believe assault can’t happen in a relationship, amongst family members, or from the same person more than once. Then the final nail that warps our perception of sexual violence is young kids are told they have to be hugged and touched by adults, kids are told if someone is being mean/aggressive it just means they have a crush, and teachers and parents all together like to steer clear of discussions around bodies, sexuality, and reproduction.

These norms of silence and myths around sexual violence began influencing since adolescence. We are taught warped ideas of what consent, sex, and attraction mean when sexual violence occurs. Some people don’t know. It can take months, or even years for some survivors to realize they are a survivor.

A survivor can be totally aware they were assaulted but be shameful of the fact it happened. It is a normal and valid response, but it can also prevent people from speaking their truth and seeking support.

Sexual violence is rooted in power and control, so on the opposite side, that means a survivor was robbed of any power and control over their body and experience. Part of shame has to do with breaking down ways someone could have stopped the assault and taken back control.

Some of the most common ways shame show up is a survivor telling themselves:

- You didn’t say no firm enough or stop the assault

- You shouldn’t have trusted them

Shame has a tendency to impact survivors that are men and survivors that know their perpetrators more. If the assaulter is a close friend or family member, speaking out could break apart families, friend groups, and it could cause the survivor to lose a sense of community and security. While survivors that are men are taught from childhood that men can’t be assaulted, because they’re in control and they want sex. So the idea of being vulnerable, powerless, and assaulted doesn’t “fight” the narrative.

3. A survivor is scared of not being believed and/or retaliation

Not believing someone or retaliating is not just brought on by the perpetrator, but it has to do with a general notion that sexual violence isn’t an issue. This is highlighted perfectly in the documentary The Hunting Ground. One of the most prominent ways we see victim shaming and silencing is with the story of Jameis Winston. In 2012 FSU student Erica Kinsman was assaulted by Winston. Within a few days of the assault, she had been to the hospital, got a rape kit done, and reported. There was enough evidence for Winston to be picked up and questioned the next day, but to this day, that never happened. A year later the school publicly began “investigating.” The investigations consisted of doing next to nothing and creating no protection against retaliation for Erica. This was the same year Winston’s football career really took off and he won the Heisman Trophy… Meanwhile, Erica was being harassed so much by fans, students, and faculty she left the school. Despite DNA evidence nothing ever came of the local police and school investigation. While she is probably still healing and processing, he is in the NFL. Winston wasn’t telling officers, fans, and faculty to ignore Erica, they chose to do that themselves. For the glory of football, because he said it was consensual because if people are drinking assault can’t happen? There’s no way to know everyone’s reasons, but it happened.

For anyone who is reading this and wants to scream false accusations, the assault and filing happened before he was a “star,” so there was no money motivation or defaming a public figure's reputation. Then additionally, others have accused him, and in 2018 he was suspended from 3 games for groping an Uber driver. Additionally in 2016, a year into his NFL career, Winston decided to settle the lawsuits for rape allegations, out of court.

I am going to make an additional post about this because this is a doozy. But in short, many survivors are not willing to endure multi-year-long investigations and trials. The judicial system is not trauma-informed or made in a way to protect survivors, so for years they have to see their perpetrators and continually tell their story over and over again, usually for minimum sentencing or no sentencing because it’s ruled a “mistake” or “bad decision.” (If you don’t believe this check out my post that comes out on July 13th with actual quotes from judges during sexual assault trials. Here is the link to the twitter thread of quotes, so he can get a preview of what survivors deal with).