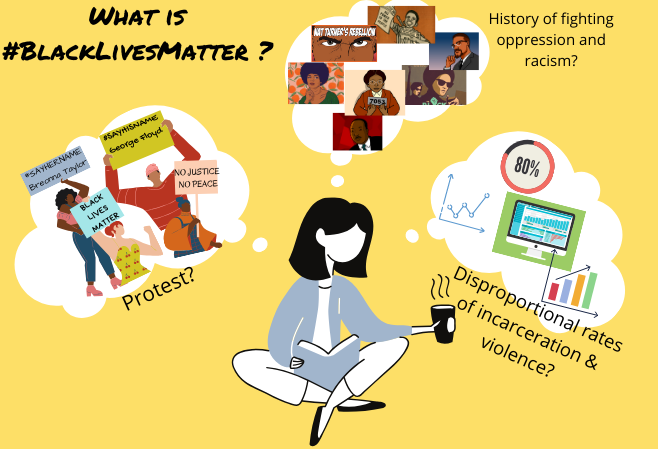 This is translated from guía básica, or “Basic Guide,” by Dr. Maricela Becerra (IG @academicmami). This was originally written in Spanish to create a resource for Spanish speaking families. Our team decided to translate it because it covers basic phrases and terms relevant to Black Lives Matter. Dr Marciela Becerra's guide breaks it down into concise and easy to understand definitions, making it a great resource for anyone who is just learning or beginning to talk about the protest, BLM, and racism.

It is assumed that a person is dangerous, bad, or a criminal only by their skin color, without any evidence supporting these ideas. For example, people within the Black or African-American community are detained by the police more than other communities, and on some occasions, law enforcement will use more violence against this specific community than they would for someone who is not a Black person committing a similar offense.

Those who are fair-skinned or white in this country are treated with more privilege than those with darker skin tones. For example, they are not immediately assumed to be criminals nor bad, and even if they are, the punishment is not the same. It does not mean that those with lighter skin tones do not face any obstacles, it just means that their problems are not due to their skin tones. This privilege has been normalized so that a lot of people do not realize what they have or that it exists. We can think that those who are criminals are because they actually are and have been arrested due to violence meanwhile people of color, especially  African Americans, are arrested more often and receive harsher punishments than those who are fair-skinned committing similar offenses.  Additionally, Blacks and African-Americans are detained, brutalized, and even murdered when no crime has taken place.  Having white privilege means being able to have interactions with law enforcement and being treated fairly with little-to-no concern for the loss of freedom, dignity, or life.

Having negative feelings against Black or African-American people. These feelings are based on stereotypes or negative pictures constructed of this community. An example is thinking of a child with a white complexion and clear eyes as more beautiful and innocent than a black/brown child with dark eyes. These prejudices affect the way in which communities are being treated and seen.

Institutional power systems have been created with the mindset of benefiting white-skinned groups of people. This means that Communities of Color, such as the Black or African-American community, do not receive the same resources, benefits, or opportunities as others.

You can see this systemic racism in employment, housing, the racial wage gap, the type of housing, or neighborhoods where Black communities live, and the incarceration of the Black communities in large numbers. Oppression and racism go beyond physical violence and are manifested in our daily life through these power systems and institutions.

The Black or African-American community has been a victim of racism and police brutality more than other communities. Police kill more people in this community without a reason and those who abuse their power are not punished. This is why it is said that “black lives matter”  because violence and lack of justice have shown that the lives of this community are not valued. This does not mean that they do not value the lives of other groups, but that we cannot ignore that the Black or African-Americans community is at greater risk.

The African-American community in this country was enslaved for several centuries. When slavery was made illegal, this community was oppressed by segregating it. This means that for decades they did not have access to the same education, jobs, and other opportunities as white people. Segregation ended over 60 years ago, but we cannot ignore that so many centuries of oppression, slavery, abuse, and not being treated as human beings, have contributed to the way in which this community is treated today.

It is understood that it is sad that some businesses have been affected. There are people of all colors who use the protests for other purposes, but this does not define the movement. The reason for the protest is to denounce the death of members of the Black or African-American community, that should be the focus. It is not our place to tell the community how to express their pain and frustration. Material things can be replaced, by focusing on material damage versus the senseless loss of Black lives, we are repeating the idea that the lives of the Black or African-American community are unimportant.