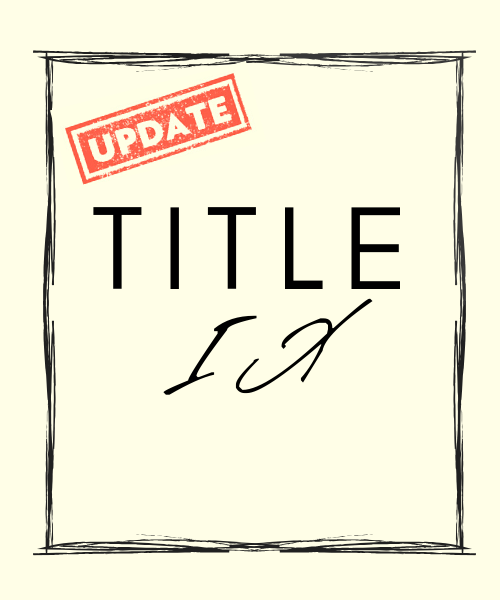 What Is Title IX?

The Education Amendment Act of 1972, Title IX, is composed of 37 words, but fundamentally changed how federally funded schools responded to sexual harassment and gender discrimination. The law states, "No person in the United States shall, on the basis of sex, be excluded from participation in, be denied the benefits of, or be subjected to discrimination under any education program or activity receiving Federal financial assistance." (1) Over the past 5 decades, the application of Title IX has come from the interpretation of education boards and court cases.

Title IX originally gained publicity in relation to creating equal access to sports. Schools were required to have an equal amount of sports for men and women, and provide equal and fair sports scholarships, and “after 30 years of Title IX being present, 1 in 2.5 girls played varsity high school sports. About 3 million teen girls are playing at the high school level today because of Title IX” (2).  In the past 2 decades, Title IX has also gained popularity in relation to sexual harassment and sexual violence and schools not efficiently and effectively responding to claims. This has looked like schools saying they are not responsible for student to student sexual violence, not providing safety measures for students experiencing continual harassment, and just a general indifference to sexual violence.

Survivors, advocates, and legal organizations have been fighting for more accountability in how schools address sexual violence, and in 2011 people believed things would change long-term. The Obama administration wrote “Dear Colleague,” a letter stating that the federal government “would start holding colleges accountable for mishandling [Title IX] complaints.” Some of the regulations the Obama administration put in place where a 60 day limit on investigations, no live hearings, no cross-examinations, and various protections with access to counseling, protection orders, and access to change schedules and housing locations.

After a few years of complying, and more and more survivors coming forward, some people began to become frustrated and believed administrators overstepped and were unfairly suspending people, especially when alcohol was involved. Due process groups demanded a fairer process for students who had been accused. In 2017, when DeVos took office she withdrew the guidelines that were issued during the Obama era and went on a journey to create regulations that also “protected” the accused perpetrator.

After working with due process groups, perpetrators of sexual violence, and expelled students, on Wednesday, May 6, 2020, the U.s Department of Education announced a new 2,000 paged Title IX rule. As of August 14, 2020, the changes will include limiting who are mandatory reporters, require live hearings with cross-examination, increase the standard for what is considered harassment, put no time constraint on an investigation, and narrowing the responsibility based on location because it must happen on campus. The new location standard does have additional guidelines that “colleges must investigate off-campus sexual misconduct that occurs in educational activities, but not in off-campus apartments or during study abroad. Fraternity houses are considered educational programs if they are recognized by the institution”. (3). It is essential to note that many major universities already do not recognize Greek organizations, especially fraternities, in an attempt to separate themselves from lawsuits and misconduct claims.

The major issue with this rule is colleges already met “constitutional due-process standards [and many] already hold Title IX hearings.” The major difference is schools did not allow cross-examination, which is where the accused, or their adviser questions the accuser. Cross-examination is discouraged in the investigation of sexual violence because advocates for sexual-assault victims say “the survivor would be living the trauma over again, and this would dissuade people from seeking justice.” The new rule also allows anyone to question, so these may be an expensive defense attorney or a possible assaulter’s family member or best friend. So this not only has the potential to retraumatize, but also creates inequality base on wealth and access, and “While faculty and staff could theoretically be trained to fill that role, few educators will feel equipped to do so against an experienced litigator.” (4).

“Public colleges in Kentucky, Michigan, Ohio, and Tennessee have already started cross-examinations in Title IX hearings” these colleges received the same amount of reports in 2019, as in previous years; but other reports are showing that fewer students pursued a formal investigation and opted for an informal resolution. “Few victims of sexual assault will want to go through such a process. For them, due process for defendants may end up meaning no process at all” (Altschuler & Wippman, 2020). Therefore, the assailant escapes consequences of their actions, and continues their education leaving the other students in a state of danger and fear.

The new Title IX rules feel like a scapegoat. Schools are being allowed to essentially choose how they react to sexual assault and sexual discrimination without being held liable. If the victim does decide to proceed with an investigation, they will have to relive the trauma of a live hearing or incompetent council. These rules are taking us back in time instead of leaping forward to a progressive and equal opportunistic future for all students.