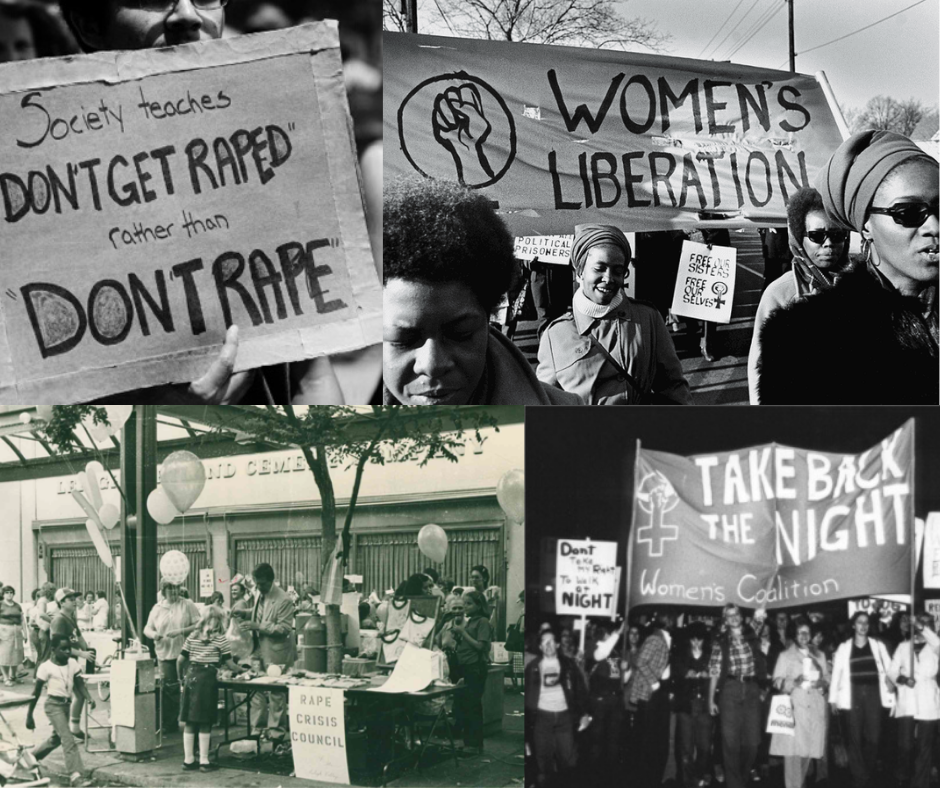 It’s coming to the end of April, which also means the end of Sexual Assault Awareness Month, but have you ever thought about who paved the way?

Who fought for national sexual violence awareness? Well if you have, or if you haven’t, I am here to provide all the information.

When learning about sexual violence prevention and advocacy there are often parts of history that are forgotten and silenced. The legacy of sexual violence awareness and prevention has been led by Black Women and Women of Color (WoC) for decades. The hypersexualization of WoC, specifically Black women, traces back to the 1400s and has influenced the political and cultural understanding of violence and consent. Sexual violence was used as a weapon throughout wars and slavery to control and dehumanize(1). This horrific legacy has made Black Women and Women of Color the initiators of anti-sexual violence work.

When did sexual violence awareness start?

We often see information about Sexual VIolence awareness and prevention dating back to the 60s and 70s when national marches and rape crisis centers started opening. I am going to roll it back even farther and start in 1866.

Following the Civil War, in 1866, white Memphis Police officers and Black Union Soldiers got into a shooting altercation. The white residents, with aid of the police force, decided to rampage through Black neighborhoods, in Memphis, assaulting, murdering, and raping Black soldiers and civilians. This is known as the Memphis Riots or the Memphis Massacre.

But how is it significant to the history of Sexual Violence? 5 Black women, who survived the riots and the sexual violence they experienced, testified during a congressional investigation. These were the first testimonies of sexual violence to be a part of a US court trial (2).

In addition 1862-1931, Ida B. Wells spent her life fighting against racism, sexism, and gender-based violence. Wells helped to lead anti-rape movements throughout the South (3). She specifically focused on destroying the stereotypes and hypersexualization of Black Women and the idea that all Black Men are perpetrators. Her work was intended to change the cultural norms that led to increased violence.

What about community and nationwide movements?

With 21st-century movements gaining so much momentum and media attention we often forget to look back at who came before use. Recy Taylor’s fight for justice against her perpetrators in 1944 left a lasting impact. As she was leaving church, in Alabama, with 2 friends, 7 white men kidnapped and terrorized them. Then, 6 of them raped Taylor. She would not be silenced and reached out to the NAACP. They sent one of their best investigators, Rosa Parks, to explore what happened. The investigation led to the creation of the Committee for Equal Justice (later the Montgomery Improvement Association). It can even be argued that the Civil rights movement was grown out of Black Women fighting for agency and against sexual violence (4). Rosa Parks' work in fighting the intersection of gender violence and racial violence paved the way for the idea of intersectionality, focusing on how identities intersect and impact one’s lived experiences.

The fight for social activism and awareness extended over the next couple of decades. This was seen when the first rape crisis center, Bay Area Women Against Rape, opened in 1971, in San Francisco. Within the next 5 years, 400 Centers opened across the country. Then in 1975 state coalitions began to form with the creation of the Pennsylvania Coalition Against Rape. Along with national organizations came national events and marches, such as Take Back the Night events, Women’s Equal Rights Parades, and Women’s Liberation Marches (5).

Well, When do Laws and policies start changing?

The conversation around sexual violence awareness and prevention came to political and policy attention in 1991. Anita Hill testified during Clarence Thomas’ Supreme Court Nomination hearing. She shared her story of sexual harassment and this brought the issue of sexual violence and accountability to the forefront of politics.

Then in 1994, President Bill Clinton passed the Violence Against Women Act (VAWA). This provided funding toward investigations and prosecutions of violent crimes against women, mandatory restitution on those convicted, and allowed civil redress. VAWA created legal protection for women who were experiencing sexual and domestic violence, and it extended to their children. This was the first time in US history that gender-based violence was deemed a legal issue and not just a personal issue (6).

Now that we have all of this information about the history, when does SAAM come into the picture?

SAAM began 7 years after VAWA. In 2000 the National Sexual Violence Resource Center was created. This would become the leading nonprofit in resources and information on sexual violence awareness and prevention. Then a year later, in 2001, the NSVRC formally recognized April as Sexual Assault Awareness Month. Fast forward 8 years, President Barack Obama proclaimed April, officially, as Sexual Assault Awareness Month. Obama is the first and only president to recognize SAAM, but since 2009, April has been nationally recognized as SAAM.

This is a brief history of SAAM and sexual violence advocacy. This does not include everything or everyone that has impacted the history of sexual violence awareness, but this is a start to understanding and uplifting the people who fought for what we have today! If you're wanting to do additional research I will provide a couple of websites and books below. Also shown below is a condensed timeline of everything discussed above. There is also a condensed version of this information on the timeline below. Thank you all for being here with us today, and I want to hear your thoughts and comments.

A Black Women’s History  of the United States by Daina Ramey Berry and Kali N. Gross

6.Heldman, C., & Brown, B. (2014, August 08). A Brief History of Sexual Violence Activism in the U.S. Retrieved from https://www.nsvrc.org/blogs/how-we-got-here-history-sexual-assault-awareness-month